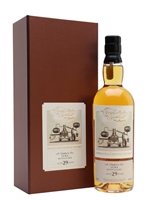 A 29-year-old Jura single malt from indie bottler Elixir Distillers, made from a batch of just five ex-bourbon barrels that were filled between 1991 and 1992, before being bottled as part of its Single Malts of Scotland Marriage series. Aromas of caramel, clove, nectarine, digestive biscuits, liquorice and hints of wood smoke fill the nose, complemented by notes of strawberry and white chocolate cheesecake, barley sugars, star anise, crunchy granola, burnt honey and toasted oak throughout the palate.