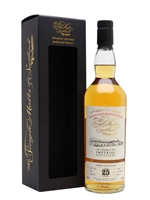 A 1995 Imperial single malt from indie bottler Elixir Distillers that was matured in a single barrel for quarter of a century, before being bottled in April 2021 as part of its Single Malts of Scotland series. Aromas of peaches, apricots, custard tarts and freshly-baked pastry fill the nose, complemented by notes of pavlova, peaches, whipped cream, white chocolate and honey-drenched baklava throughout the palate.