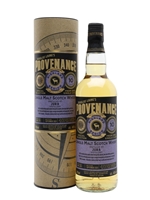 A 2011 Isle of Jura single malt from independent bottler Douglas Laing, matured in a single refill cask for a decade, before being bottled in September 2021 as part of its Provenance series. Aromas of barley sugars sweets, baking spices and rich malt fill the nose, complemented by notes of orange marmalade, brown toast, buttery malt loaf and chocolate throughout the palate.