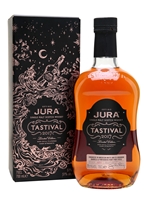 The 2017 release of Jura Tastival was aged initially in bourbon casks before being split into two. Half was finished in first-fill bourbon barrels and the rest in port pipes from Graham's. Rich and complex with notes of orange, pineapple, cassis and walnut.