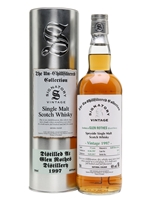 A 19-year-old single-cask whisky distilled at Glenrothes on 2 June 1997 and then bottled on 16 February 2017 for the Un-chillfiltered Collection after maturing in a refill sherry butt, resulting in a typical sherried whisky notes of oranges and pepper.