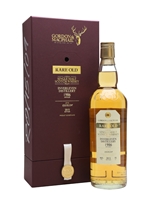 Inverleven was a malt distillery situation within the huge Dumbarton grain complex. This bottling was distilled in 1986 and bottled in 2015 for Gordon & MacPhail's Rare Old series.