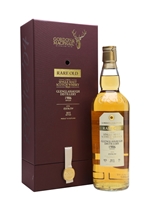 This was distilled at Glenglassaugh in 1986, the year the distillery was to be mothballed for more than two decades. Matured for around 29 years, this was bottled in 2015 for Gordon & MacPhail's Rare Old series.