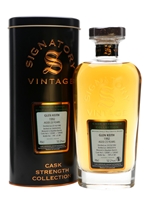 A 1992 vintage Glen Keith from Signatory as part of the Cask Strength Collection. Aged for 23 years in a pair of bourbon barrels, this is rich and sweet.