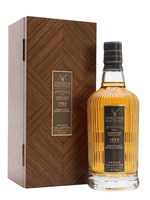 A fruity whisky from closed Inverleven distillery, once housed inside the Dumbarton grain distillery but closed in 1991. This was distilled on 22 January 1985, matured for 33 years in a refill bourbon barrel and bottled on 6 July 2018. It's a classic Inverleven, building on it's fruity and grassy lowland style with layers of oak-influence, from even more fruit to spice, sweet toffee and vanilla and a touch of chocolate.