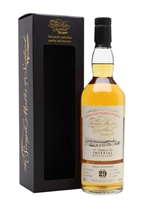 A 1991 Imperial single malt from independent bottler Elixir Distillers, matured in a single ex-bourbon barrel for just shy of three decades, before being bottled in July 2020 as part of its Single Malts of Scotland series. Aromas of raspberries, strawberry ice cream and tropical mango fill the nose, complemented by notes of cherry cola, vanilla, gingerbread and tangerines throughout the palate.