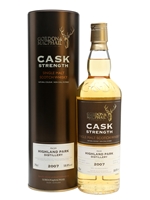 This 2007 vintage Highland Park was bottled by Gordon & MacPhail as part of the Cask Strength series. The distillery is the northernmost in Scotland, being located on the Orkney Islands. Distilled on 25 September, it was matured in six refill-bourbon barrels for nine years and bottled on 2 November 2016. This is smoky, fruity and spicy with notes of pineapple, pepper, banana and mango.