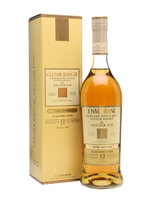 Relaunched in 2011, Glenmorangie's Sauternes-finished Nectar d'Or is now proudly boasting a prominent age statement that wasn't there before, proclaiming it to be 12 years old. Give it a couple of years and it'll be staying out after supper and growing a weedy moustache on its top lip.