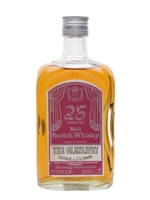 A special release of 25-year-old Glenlivet released in 1977 to celebrate the Silver Jubilee of Queen Elizabeth II. This was bottled by Gordon & MacPhail under the George & JG Smith name in the square bottle that was prevalent at the time.
Please note that this is an old bottle and the closure may have deteriorated; care should be taken when opening the bottle. As such, the item is sold as described.