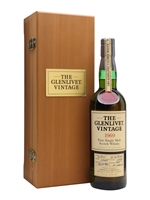 A rare 1969 vintage Glenlivet, bottled in 1998 as part of the distillery's Cellar Collection series at the extra accurate strength of 52.76%.
Please note that this is an old bottle and the closure may have deteriorated; care should be taken when opening the bottle. As such, the item is sold as described.