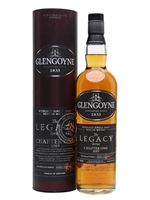 The first whisky in Glengoyne’s Legacy Series, Chapter One has been aged in first-fill European oak oloroso sherry casks, as well as some refill casks. It has a fruity, sweet character, with notes of sweet sherry, vanilla and dried apricots, while a bolder, spicier note develops slowly.

The Legacy Series Chapter One commemorate the life and achievements of Cochrane Cartwright, and his vision of what Glengoyne could become. Distillery Manager from 1869, Cartwright dramatically slowed down the distillation process and introduced the distillery to sherry casks.