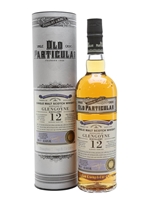 A 2008 Glengoyne single malt from indie bottler Douglas Laing, matured in a single refill butt for 12 years, before being bottled in October 2021, as part of its Old Particular series. This is an intense and chewy dram with notes of fruit-flavoured toffee, enticing spices and menthol hints.