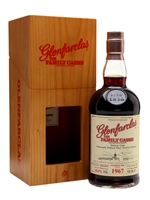 A heavily sherried 1967 vintage Glenfarclas released as part of the much acclaimed Family Casks Series. This was aged in sherry butt 5113 before being bottled at cask strength of 55.6% on 15 April 2016. One of just 64 bottles.