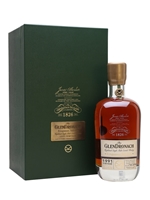 A limited-edition bottling of Glendronach created for Kingsman: The Golden Circle, one of the biggest films of 2017 – director Matthew Vaughn specially selected Glendronach as the source of a great Scotch whisky for the film. Kingsman was distilled in 1991 and matured in sherry casks, producing a classic Glendronach: rich, fruity and packed with spice.