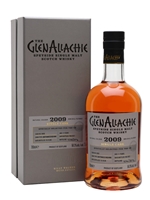 A 2009 Glenallachie single malt that has been matured for 11 years, including a secondary maturation in a single Grattamacco Tuscan red wine barrique. Aromas of heather honey, toffee, dark chocolate, peaches, almonds, orange zest and nutmeg fill the nose, complemented by notes of red berries, ginger and cinnamon throughout the palate.