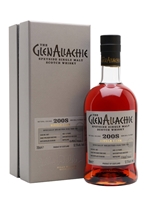 A 2008 Glenallachie single malt, matured in a single Port pipe and bottled in August 2020 after 12 years. Aromas of honey, treacle, red grapes, cinnamon and dark chocolate, complemented by notes of heather honey, vanilla, cinnamon, mocha and dried fruit throughout the palate.