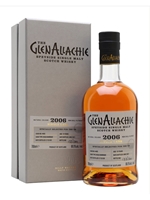 A 2006 Glenallachie single malt from fifth release in the distillery's Single Cask series, matured in a single ew-Rioja wine barrique for 15 years, before being bottled in June 2021. Aromas of stewed plums, raspberries, coconut, treacle and nutmeg fill the nose, complemented by notes of heather honey, ginger, red berries, almond and apricots throughout the palate.