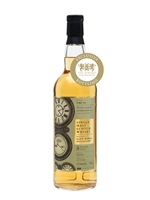 Glen Moray is one of Speyside's underrated distilleries. This green-tinged eight-year-old shows off the distillery's high-quality spirit with notes of vanilla, toffee, lemon and cinnamon.