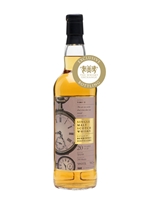 This 20-year-old Benrinnes has been released as part of The Whisky Exchange's Time series. Matured in a bourbon cask, this has notes of meadow flowers, fruit and gentle spice.