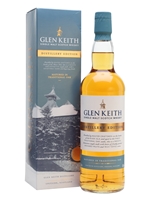 The first official bottling from the re-opened Glen Keith distillery in Speyside, which was revived in 2013 and whose spirits normally appear in blends such as Chivas Regal and 100 Pipers. This new, no-age-statement whisky is a gentle dram with notes of poached pears, honeycomb and vanilla toffee.