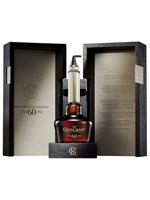 A limited-edition single malt from Glen Grant that was released in 2021 in celebration of master blender Dennis Malcolm's 60th anniversary in the whisky industry. Distilled on 24 October 1960 and matured for 60 years in a single oloroso sherry cask, this impressive single malt offers notes of honey-drizzled dried fruit, sweet malt, decadent Christmas cake and sticky crystallised ginger throughout the palate, with hints of tobacco and oak spice lingering in the finish.