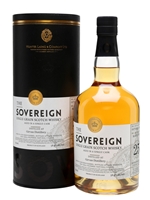 A 25-year-old single grain whisky from the Girvan distillery (owned by William Grant's, who are also parent company of Glenfiddich and Balvenie). This has been bottled at a very potent 58.9% cask strength by Hunter Laing for the Sovereign series.