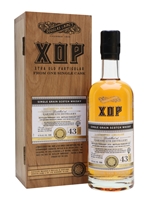 A delicious long-aged grain whisky from Garnheath, distilled in 1974. Bottled from a single cask as part of Douglas Laing's Xtra Old Particular series, this whisky has pronounced notes of spice, toffee, honey and vanilla, with mature fruit coming through at the finish.