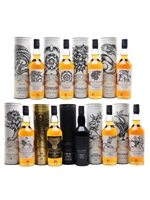 A collection of nine Scotch whiskies to represent the great houses of Westeros and the noble and courageous Night’s Watch. Whichever house your allegiance lies with there is something in this set for you. Whether you live for fire like the Mother of Dragons, remain loyal like the Starks or fight tooth and nail for power like the Lannisters, there is a whisky to represent the spirit and essence of each House. The distilleries chosen for these whiskies are equally prestigious and have characteristics that align with the Houses of Westeros and the Watchers on the Wall.