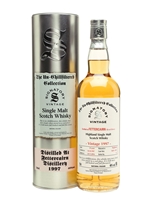 Fettercairn is rarely seen as an independent bottling these days. This 1997 vintage Fettercairn has been released by Signatory as part of the Un-Chillfiltered Collection. Distilled on 10 October, it was aged in a pair of hogsheads, before being bottled at 19 years of age on 24 November 2016. Notes of oranges are often picked up on whiskies from this distillery.