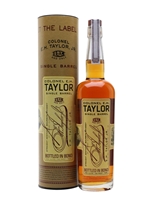 Named after the founding father of the bourbon industry, Colonel Edmund Haynes Taylor. This single barrel bourbon is aged inside warehouses which he built and the brand is owned by Buffalo Trace.