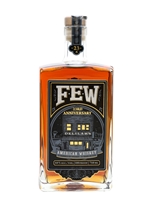 This exclusive release of FEW whiskey has been created for the 23rd anniversary of legendary Chicago bar Delilah's, located just a few miles away from the distillery. A combination of bourbon, rye and single malt whiskeys, this is sweet, spicy and gently smoky.