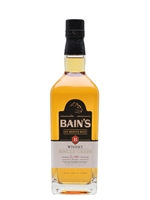 Bain's is the first South African single grain whisky, made in Wellington at the James Sedgwick distillery. Bain's has made an impressive debut in the UK, picking up a Gold Medal at the International Wine & Spirits Competition in 2010 and a Silver at the International Spirits Competition before crowning that with the title of World's Best Grain Whisky at the World Whisky Awards.