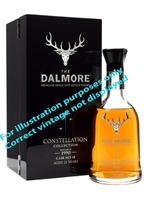 Aptly distilled the year man landed on the moon, the 1969 release of the Constellation Collection is sweet and rich with notes toffee, cinnamon, black cherry, sultanas and treacle. It was finished for three years in a bourbon-barrel as part of its 43-year maturation.