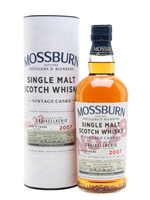 A 2007 Craigellachie single malt from bottler Mossburn, initially matured in ex-bourbon casks and finished in oloroso sherry hogsheads, before being bottled in November 2021 as part of its Vintage Casks series. Aromas of orange, marmalade and struck match fill the nose, complemented by notes of black pepper, fruit cake, raisins, sultanas and hints on smoke throughout the palate.