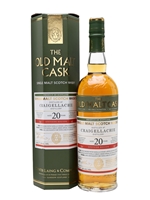 A 1995 vintage Craigellachie from independent bottler Hunter Laing as part of the Old Malt Cask series. Distilled in September, it was aged in sherry butt 12361 for 20 years before bottling in April 2016. Rich and creamy with notes of vanilla, apples, and sultanas.