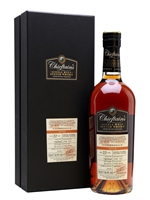 This 22-year-old whisky was distilled in June 1995 at Caperdonich, which closed in 2002. Aged in a single hogshead, this was bottled by Ian Macleod in June 2017 as part of the Chieftain's series.