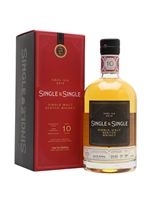 A 2010 Caol Ila single malt from independent bottler Single & Single that was matured in a single American oak hogshead for a decade, before being bottled at cask strength. Aromas of rich, sooty smoke, tart gooseberries, salty sea air and liquorice fill the nose, complemented by notes of aniseed, warm smoke, eucalyptus, peppermint and Lapsang Souchong tea on the palate, with smoky tendrils and hints of star anise lingering in the finish.