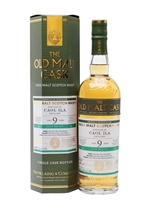 Made in 2009 at Caol Ila distillery, this Islay single malt has been matured for nine years in a single refill hogshead, before being bottled by Hunter Laing in May 2019 as part of its Old Malt Cask series. Ashy aromas of smoke and salty sea air develop on the nose, and the palate offers notes of peat smoke, toffee and sea salt.