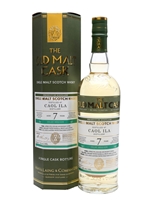 A young, seven-year-old Caol Ila from Hunter Laing's Old Malt Cask range, distilled in December 2009 and bottled in February 2017. This is creamy with notes of vanilla, fruit and smoke.