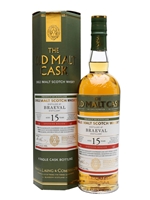 A 2001 Braeval from Hunter Laing as part of the Old Malt Cask series. Distilled in December and bottled in February 2017 at 15 years of age, this is velvety with notes of red berries, marzipan and vanilla.