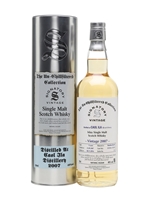 This Caol Ila is low in age and light in colour, but full of peaty flavour. Distilled on 25 September 2007, this was aged in a pair of bourbon barrels for nine years before being bottled by Signatory for the Un-Chillfiltered Collection.