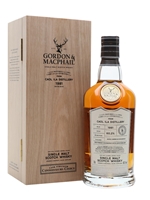 One of just 201 bottles charged from a refill American hogshead and bottled at 60.2%, this is a beautifully-matured Caol Ila. The peat fire of its youth now burned to embers, its smoked-meat foundation is layered with thick, ripe-fruit flavours and sweet-cereal notes, while a touch of light brine highlights its dark cocoa depths.