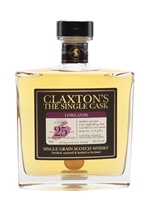 Produced by Claxton's, an independent bottler based in York, this is a sweet and fruity single-cask edition of Cambus 25 Year Old. Aromas of vanilla, white chocolate, white grapefruit and toasted marshmallows are followed by flavours of boiled sweets, barley sugar, honey and almonds.

The Cambus distillery was founded in 1836 and closed its doors for the last time in 1993. The site is now used as Diageo's cooperage.