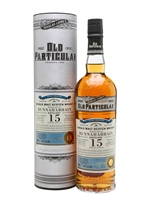 Aged in a sherry butt, this is a 2001 vintage Bunnahabhain from independent bottler Douglas Laing as part of the Old Particular series. Bottled at 15 years of age, this is sweet and spicy with notes of dried fruit, Christmas pudding and ginger.