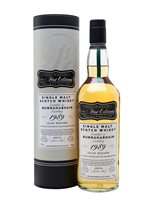 A 26-year-old Bunnahabhain from Hunter Laing's The First Editions series. Distilled in 1989, this is a buttery whisky with notes of dark chocolate, toasted almonds and pineapple.