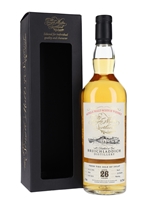 A single-cask unpeated whisky, distilled at Bruichladdich distillery in 1992, this has been matured in a single barrel for 26 years before being bottled by Elixir Distillers in July 2019, as part of its Single Malts of Scotland series. Aromas of freshly-baled hay, sawdust and summer flowers mingle with toffee and liquorice on the nose, and the palate offers notes of rosemary, violets, spearmint, warm tarmac roads, agave and lemon peel.