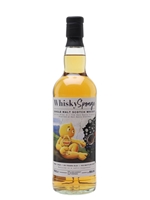 Distilled at Ben Nevis in 1996, this bottling from Decadent Drinks' Whisky Sponge series was aged in a single refill hogshead which yielded 153 bottles in 2021. The label features the Sponge being poured a glass of whisky in an image inspired by Michaelangelo.