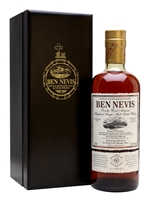 Bottled for the 60th anniversary of French importer La Maiso0n du Whisky, this was distilled at Ben Nevis in 1984. Aged for 13 years in first-fill bourbon casks and finished for 18 years in oloroso-sherry casks, this is fruity and floral with notes of Mirabelle plum, honeysuckle and coffee.