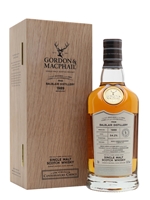 A 1989 Balblair single malt from independent bottler Gordon & MacPhail, matured in a single refill hogshead for more than three decades, before being bottled in February 2021 as part of its Connoisseurs Choice series. Aromas of green apples, lime zest and coconut fill the nose, complemented by notes of peach, honeycomb, black pepper, marzipan and baking spices throughout the palate.