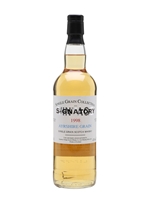 One of Signatory's more intriguing releases is this 18-year-old single grain from an Ayrshire distillery (there's only one, so this is from Girvan), distilled on 21 August 1998 and bottled as part of the Single Grain Collection on 31 January 2017.